I had the last 2 days off from work (and I almost never have 2 days off in a row!) so instead of my usual set-in-stone routine where I don’t sleep in, and immediately  go run and to spin class, I did the opposite. Monday morning I slept in a little then met my brother for breakfast at the diner in my neighborhood since he was in NYC for the day. We sat for almost 2 hours just eating and drinking coffee, and it was awesome!

I came home and did nothing but lay in bed for the rest of the day. Finally at 5 I made myself go for a nice little run. 3.5 miles and a shower later, I went down to the West Village for dinner at a place I had wanted to try for awhile called Elephant and Castle. John and I had passed it a bunch of times and I’m weirdly obsessed with elephants, plus the menu looked good so we gave it a whirl.

I would give it another chance because I think I just didn’t order what I really wanted, but I was a little bummed with the dressing that ruined the salad I ordered. The salad was arugula, beets, avocado and pumpkin seeds (some of my favorite foods) with a citrus vinaigrette. The dressing was SO lemon-y it was actually burning my throat and was reminiscent of vodka soda with lemon. No bueno.

I also had a smoked chicken sandwich with avocado, but it came on white toast (?) so I just ate the chicken and avocado with some blue cheese dressing that was absolutely AMAZING! I stole lots of John’s french fries too, and they were really good. The burgers looked so good too, and made me mad that I can’t eat red meat without becoming violently ill 😦

Tuesday morning I leisurely enjoyed some iced coffee with this awesome sugar-free pumpkin syrup I found at TJ Maxx!

I also got gingerbread but haven’t tried it yet. Just a tablespoon added some pumpkin flavor but without a super artificial taste! Yum!

The low-cal stopped there because the rest of the day was spent eating and luckily walking lots! First stop: Doughnut Plant. I am NOT a fan of doughnuts and never have been. However, I can enjoy a bite or two of these because they have awesome flavors and taste better than any others I’ve ever tried. Still, 2 bites and I am totally on the verge of sugar coma. Even with all of the cookies I’ve been eating lately, doughnuts are too much for me.

Around the corner is my favorite bagel shop, Brooklyn Bagel. These are the freshest bagels you will ever taste. I always get the oatmeal raisin bagel, toasted, with egg whites, turkey bacon and cheese. No grease, just deliciousness. 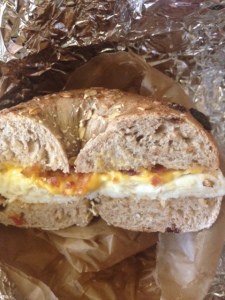 Lots of walking following this carb filled morning, which ended down near Madison Square Park at Eataly. I’ve lived in NYC for over a year and a half and this was my first time at the famed Eataly! It’s essentially a large open market that has various little restaurants that basically just have tables out in the open, and different sections to buy all sorts of cooking supplies and food. It’s so italian and such a cool experience!

After strolling around and drooling, I decided on a salted caramel gelato cone from the gelato shop. Didn’t get a pic, but it was absolutely ridiculously good.

Across the street from Eataly is Madison Square Park, where we hung out for awhile and enjoyed the view.

Love that little parks like this exist in the city where you can catch your breath and relax after a day of shopping and eating!

Besides food, my one little purchase for the day was a pair of shoes I have been toying with getting. Wedged sneakers do not sound like something I would wear… in fact, my friend at work was obsessed when the Isabel Marant wedge sneakers came out months ago and it wasn’t until I saw a few girls wearing them that I actually started to like them. I ended up buying a pair of “inspired” Isabel Marant wedge sneakers and I love them! I say inspired by because to be a knock-off, it would have to have a fake label, right? 😉

The link for the REAL Isabel wedges is here; the ones I got are the same color and look just like these! Except mine were $40. If I had the money, I would always buy the original designer. I do NOT believe in purchasing knock-off bags down on Canal street in Chinatown that have the fake labels printed all over the bag, but inspired looks are different. Everyone is inspired by something or someone, so as long as you are using your own label I think it’s great to allow people of all different financial backgrounds to look fashionable! I’ll post when I wear my wedges for the first time!

What are you favorite NYC restaurants and places to go?

Have you/would you ever buy knock off designer bags/shoes or inspired by? Years ago I was OBSESSED with the acutal knock off bags, but since getting older and studying fashion, I understand the importance of not supporting the labor that goes into making those knock-offs!